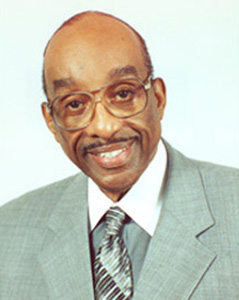 Oswald P. Bronson, Sr., Ph.D., an alumnus of Bethune-Cookman College, served as the institution’s president for 29 years – from March 18, 1975 until 2004 when he was named president emeritus.

Commitment to academic excellence was the cornerstone of his presidency.  Under his leadership, major fields of study increased from 12 to 37.  In addition, seven continuing education centers for students began operating throughout the state.  Dr. Bronson also spearheaded investments in faculty development, student achievement and retention.  While maintaining accreditation by SACS, Florida State Board of Education, and The University Senate of The United Methodist Church Board of Higher Education, the college added new accreditations in the Nursing and the Teacher Education programs.

Student enrollment increased during Dr. Bronson’s tenure from 1,520 students in 1975 to 2,794 in 2003.  He also presided over tremendous growth of the institution’s physical plant, budget and endowment.  Fifteen new buildings were constructed under his Administration, most notably the 2,500 seat Mary McLeod Bethune Performing Arts Center.  The institution’s annual budget grew from $6.2 million in 1975 to $51.4 million in 2003, and the endowment surged from $1.2 million to $26.5 million in the same time period.

An ordained United Methodist minister, Dr. Bronson pastored in a number of churches over 16 years.  Prior to being named president of Bethune-Cookman College, he served as president of the Interdenominational Theological Center.

Dr. Bronson graduated from Bethune-Cookman College in 1950 and also earned a bachelor of divinity degree from Gammon Theological Seminary.  He received a Ph.D. degree from Northwestern University in 1965.