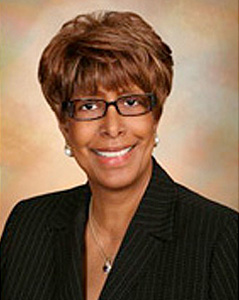 Dr. Mary McLeod Bethune founded a normal and industrial school for girls that she transformed into a premier co-educational liberal arts college.  The first woman to serve as president after Dr. Bethune, Dr. Trudie Kibbe Reed, turned the college into a university – now known as the “Great” Bethune-Cookman University.

Dr. Trudie Kibbe Reed assumed the presidency of the Bethune-Cookman College on August 16, 2004 after a successful career in higher education as both a college president and a high-ranking administrator within The United Methodist Church.  She is a student-centered leader, educator, taskmaster, administrator, visionary, transformative leader, public speaker, motivator, and fund-raiser.

Dr. Reed pulls from a wealth of experience that includes two presidencies at the college/university level, as well as a member of the General Secretariat of a women’s advocacy organization, and over 18 years in various top-tier rankings of The United Methodist Church administration.  Dr. Reed’s leadership skills are widely recognized and utilized in varied arenas.  She was elected to the board of the National Association of Independent Colleges and Universities, and U.S. Senator Bill Nelson selected her to serve on Florida’s Federal Judicial Nominating Commission.  In 2008, she was elected as a member of the United Methodist General Board of Higher Education and Ministry.  In 2006, she was selected by the Governor of Florida to serve a three-year term on the state’s Commission on Volunteerism and Community Service.  Appointed by the US Secretary of State Arne Duncan, she serves on the HBCU Capital Financing Advisory Board and has served the White House Commission on HBCUs under appointment by President Bill Clinton.

Dr. Reed is a member of the Daytona Beach Chamber of Commerce, Rotary International, the Futures Foundation for Volusia County Schools, and the United Way Board, and has received the National Association for Professional Women’s Professional Women of the Year Award in 2010. Dr. Reed also serves on the Board of Trustees on the Commission for the Southern Association of Colleges and Schools (SACS) and serves as President of the National Association of Schools and Colleges of the United Methodist Church (NASCUMC).

Education: Dr. Reed received a B.A. degree in Sociology and a Master’s degree in social work from the University of Texas at Austin. She earned an M.A. degree and Doctorate degree from Columbia University in the area of adult and higher education.  Again, following in the footsteps of Dr. Mary McLeod Bethune, Dr. Reed received an Honorary Doctorate for her humanitarian work from Rollins College.

Career Highlights: Dr. Reed served 18 years as a senior level administrator with The United Methodist Church.  At age 28, she became the youngest CEO elected to the General Commission on the Status and Role of Women.  When later serving as Associate General Secretary for the General Council on Ministries, she developed educational programs for eight national agencies, seminaries, colleges, and universities.  She also coordinated the denomination’s first national initiative in prison ministry, deaf ministry, and ministries by, with, and for older adults.  She drafted legislation and conceptualized a church-wide study that developed into a major quadrennial emphasis for the denomination: “Strengthening the Black Church for the 21st Century.”

From 1994-1998, Dr. Reed was Dean of the Leadership Institute and a tenured professor at Columbia College of South Carolina where she founded and edited the publication “A Leadership Journal for Women: Women in Leadership - Sharing the Vision.” While in South Carolina, Dr. Reed was recognized by the Governor for outstanding leadership, voted “Business Woman of the Year” and received the Diamond Twin Award from the YWCA for outstanding leadership and community service.

Dr. Reed has taught in the Doctoral program at United Theological Seminary in Dayton, Ohio and in the Conflict Resolution Program at Antioch University in Ohio.  While serving as the first female president of Philander Smith College in Little Rock, Arkansas, she broke all fund-raising records, raising more than $40 million dollars in three years.

As an elementary school student, Dr. Reed became enamored with Bethune-Cookman after playing the role of the school’s founder, Dr. Mary McLeod Bethune, in a school play. Dr. Reed states: “I never thought I would walk in the footprints of such a remarkable leader who served as my role model during my formative years.” Dr. Reed reminds students to sustain the legacy of faith, scholarship and service by giving back to society and engaging in civic leadership opportunities. Dr. Reed’s vision for preserving Dr. Bethune’s legacy includes the development of an International Institute for Civic Participation and Social Responsibility.

Family: Dr. Reed has two sons: Jason Preciphs, an attorney practicing in Providence, Rhode Island and Boston, Massachusetts, and Joseph Preciphs, a resident of Florida who lives with a disability. Dr. Reed is a member of Delta Sigma Theta Sorority, Inc. and a member of Stewart Memorial United Methodist Church in Daytona Beach, Florida.