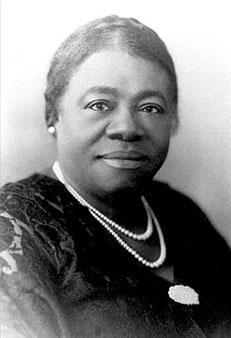 Born on a farm near Mayesville, South Carolina in 1875, Mary McLeod Bethune, the 15th child of former slaves, rose from humble beginnings to become a world-renowned educator, civil and human rights leader, champion for women and young people, and an advisor to five U.S. presidents.

Education was the first step in her remarkable journey. The young Mary McLeod worked in the fields alongside her parents and siblings, until she enrolled at the age of 10 in the one-room Trinity Presbyterian Mission School. There, she learned to read, and, as she later noted, the whole world opened to me. She went on to study at Scotia Seminary in North Carolina and Moody Bible Institute in Chicago with the goal of becoming a missionary. When no missionary openings were available, she became a teacher, first at the Haines Institute in Augusta, Georgia and then at the Kendall Institute in Sumpter, South Carolina, where she met and married Albertus Bethune. The dream of opening her own school took Mary McLeod Bethune to Florida first to Palatka and then to Daytona Beach, where she started the school that would become Bethune-Cookman University.

As she worked to build the school that she founded, she also became a national leader on issues related to civil rights, education, women and young people. As president of the State Federation of Colored Women's Clubs, she organized the group to fight against school segregation and inadequate healthcare for black children. She later served as president of the prestigious National Association of Colored Women's Clubs and founded the National Council of Negro Women. She was appointed to numerous national commissions including the Coolidge Administration's Child Welfare Conference, the Hoover Administration's National Commission on Child Welfare and Commission on Home Building and Home Ownership. She eventually became an advisor on minority affairs in the Roosevelt Administration, organizing two national conferences on the problem of black Americans.

While she gave counsel to presidents and made connections with America's elite, Mary McLeod Bethune was readily accessible to average men and women and the college students that she mothered and mentored. Her access to people of power and privilege was never something she used to benefit herself. It was always an opportunity to gain access those shut out of opportunities in our society. She enlisted leaders of government and industry to support her vision and dreams for her school in Daytona Beach, for social justice and positive change for all.

Wherever Dr. Bethune saw a need, she found a way to meet that need and move society closer to her vision. When a black student was turned away from the hospital in Daytona Beach, she opened a hospital to serve the black community. When the nation mobilized resources for the first and second World Wars, she pressed for the integration of the American Red Cross and Women's Army Auxiliary Corps. She led voter registration drives and anti-lynching campaigns.

Through it all Dr. Bethune relied on faith and prayer for guidance and inspiration, saying, Without faith, nothing is possible. With it, nothing is impossible.

Mary McLeod Bethune's vision lives on today at the school that she founded which continues to sustain her legacy of faith, scholarship service.